Trees of the Hurst

Croham Hurst is blessed with thousands of beautiful trees. Each is special in its own way, but some are especially well known -- indeed some have their own traditions of local lore and history behind them!

The map below is contributed by Samantha Focuss, 10, of Langley Road in Selsdon.  I understand that the light green areas are grassy areas (not many of those!), the brown is the Beech Plantation (an area of well-spaced beeches which forms a particularly light and pleasant part of the Hurst) and the purple is for heather, on the Hurst's remarkable but tiny mini-moorlands. 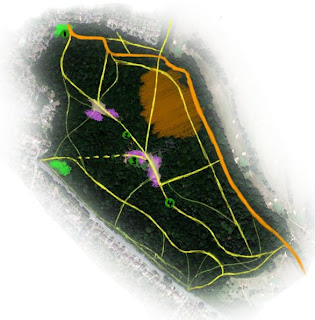 A key to the trees:

One day perhaps there will be time to fully explore the history of each of these trees.  For now, here are a few factoids...

Lord Eldon was one of the members of the Regency-era Croham Club, a rather violent group of young rakes and blades who spent most of their time on 'Brandy, Baize and Beelzebub' as Eldon himself put it. The disturbing history of this club is now rather obscure. Eldon's connection with the chestnut tree that stands guard over the Hurst's main entrance, looking toward London, is unfortunately hardly printable on a family website!

An oak and a birch in a tender embrace, the one growing through the other's roots. These days the birch (the lady of the pair) is looking rather ragged, but in the middle years of the 20th century it is recalled that the spot was used for innumerable pre-teen assignations!

The 'Bad Tree' is not so much a tree as the twisted remains of a tree, a stump standing upright and unpleasantly humanoid in the mist and darkness. In earlier times, children had various frightening stories to tell one another about it. In more recent years, teenagers seem to have acquired the habit of putting clothes on it. My own children won't go near it.

The origin of this name is unclear, but several local people separately use this name for it and it must once have been a more general term. The tree itself is a small oak with a diagonal hole running through it. It figures in a number of local stories and legends.

Do you like the new dog bins on the Hurst?